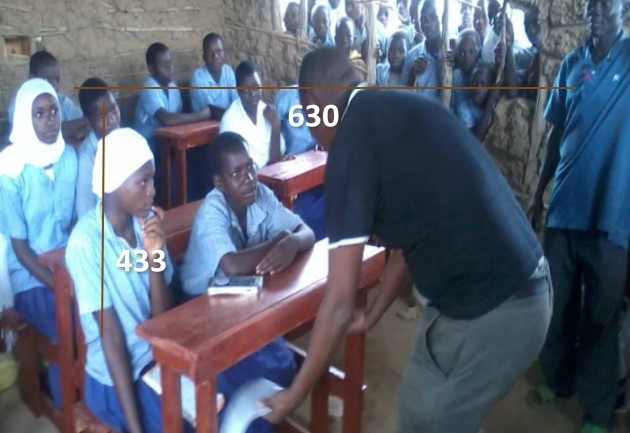 “I’ve never seen anything like this all my life.” Those were the words Maropheropheni Primary School headteacher Salim Rashid Charo uttered when a pick-up mounted with desks arrived in his school shortly after 10:00.

More dramatic was the reaction of the 196 pupils, who were playing during break time. The excited pupils ran around the school in a frenzied cacophony of joy, abandoning the makeshift balls they were kicking and throwing, to welcome the white Toyota pick-up whose carrier protruded with brown, polished, wooden desks.
It was a historic moment that was punctuated by a heavy downpour that incidentally engulfed only Ropheropheni village, leaving out the neighbouring Kilimangodo and Mangulu areas dry and dusty. The joy and happiness in the faces of pupils, teachers and school management committee was real. “What you’ve done shows just how unity of purpose can take this community to higher heights of development,” said Salim Tsuma Ngao, parent and village chairman. For close to a decade, pupils of Maropheropheni Primary School in Lunga-Lunga Constituency, Kwale County have been learning in dilapidated, unfurnished mud-walled structures. A good number of them, especially those in the lower primary sit under the trees on stones and a slab for a writing wall. The floors are dusty and may easily turn into breeding ground for jiggers. But according to the head teacher, Salim Rashid Charo, the problem of jigger infestation has never been experienced at the institution. But what happened today in the school may just be the beginning of a significant change in the lives of the 196 pupils of the school. For the first time since the school was established in 2006, 30 pupils will abandon the stones and make-shift desks to sit on real desks. This is following an on-line campaign that culminated in a funds-drive after which cash was raised to purchase fifteen desks and transported to the school by well-wishers comprising social media users. The informal group operating under the facebook group names of Kwale County Government Information Centre and Kwale County Youth Forum raised more than Ksh 40,000 in the month of March 2014 after the issue was highlighted by Mahmoud Barroh, a human rights activist known by his facebook friends as Jaz C Pytone. The initiative was taken up by Swaleh Mambeya who mobilized facebook users in the two groups. Located forty kilometers from Kenya Loma- a tiny trading centre on the Ramisi- Lunga-Lunga highway, the school is tucked away in an out-of-place end of the vast Mwereni Ward having started as a feeder school for the nearby Mtumwa and Magombani Primary schools.